As with any business, large or small, there is a risk that it might implode. Some of the largest companies (by turnover, profits and market capitalization) in Australia and around the world have imploded in the past and more (regardless of the industry they are in) will implode in the future. That said, the risk of a reasonably astute investor losing all or most of his/her capital from investing in the ordinary shares of a blue-chip company may be considered to be a low (or even a very low) risk.

The same cannot however be said about the prospect of losing a substantial portion of one’s capital from an investment in blue-chip shares.  A review of the share price movements over the past 3 years to October 2016 of 15 of the largest 20 companies (by market capitalization) listed on the ASX gives some insight into the volatility in the share prices of Australian blue-chip companies. See table below: 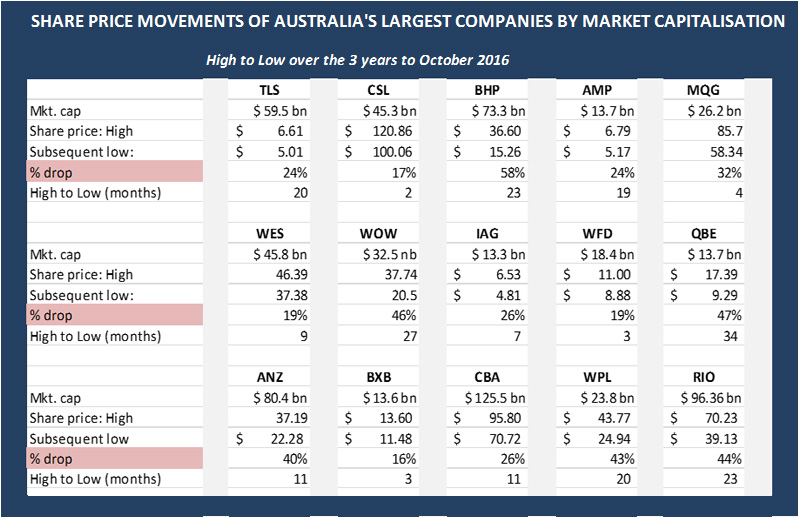 These figures would give one reasonable justification for arguing that the risk of suffering a loss of capital from investing in the ordinary shares of a blue-chip company (particularly when circumstances may require one to sell at a particular time) is “high”, not “low” as financial commentators and so called financial advisers have been espousing for years.

A review of the past performance of the price of the ordinary shares of a blue-chip company provides little indication of its future performance. A much more reliable indication comes from understanding how such shares are valued by those that control the most amount of capital invested in the market.

Basic level investment courses contend that the return the market requires on such shares is the sum of the ‘risk-free’ rate (in effect the yield on government bonds) and 4.0% to 6.0% per annum. At the time of writing the yield on 5-year Australian government bonds was 1.97%. On this basis the return the market expects from an investment in the ordinary shares of blue chip companies is around 6% to 8% per annum.  In other words, the share price reflects an expectation on the part of the market that the investor will earn a return of 6.0% to 8% per annum on the investment.

Let’s now see whether past performance supports this conclusion. The past performance of any one or just a few companies could not reasonably be used as an indication of the return generally expected of an investment in the ordinary shares of blue-chip companies. A more reasonable indication could be gleaned from a review of the S&P/ASX 20 index and possibly also from the S&P/ASX 50 and S&P/ASX 100.

Given that the so called ‘risk-free’ rate was higher 5-years ago (in November 2011), the theoretical or ‘text book’ expectation at the time would have been higher than 6.0% to 8.0% per annum. So each of the S&P/ASX 20, 50 and 100 indexes have (over the past 5-years) materially underperformed.

One argument is that the market in 2011 was just too optimistic. The other argument is that the return on investment that the market expects on blue-chip shares is well below the sum of the risk-free rate and 4% to 6% pa.  The proponents of this view argue that the enormous supply of money being channeled into blue-chip shares by stockbrokers, financial planners and the managed funds industry has reduced the rate of return expected by the market.

As we have seen from the commentary above, there is reasonable justification for arguing that an investment in blue-chip shares is a high risk, not a low risk.  If you may need to sell your shares at any particular time (whether that be to invest in another asset or business or whether it is to satisfy creditors, a former spouse or some other plaintiff) you may face the prospect of losing a substantial portion of your capital. We have also seen that  you could expect to earn a return (in the current market) of up to 6% to 8% per annum by investing in blue-chip shares.

This is well below the return I would want for taking the risk of incurring a substantial loss of capital in so-called ordinary times let alone incur even larger losses in extraordinary times, such as were experienced during the Global Financial Crisis.

Before moving on to commenting on another investment class, I would like to address a hypothetical situation. This is where the blue-chip company is ‘first-class’ in every respect. It has outstanding management, employees are loyal and motivated, it has great products, a favourable regulatory environment, the industry conditions are good, it has a great track record of performance and the risk of the company imploding or even posting a loss sometime in the foreseeable future is as close to zero as possible. Could one in this case justify requiring a return of only 6% to 8% per annum?

The answer is, ‘No’, such a low return cannot be justified. By investing in the blue-chip shares you are not taking a punt on whether the company will maintain its profitability or maintain its current growth rate, but taking a punt on whether the company performs better than the market’s expectations (of the company’s performance) at the time of one’s investment. Basically, if the market is too pessimistic you will earn a higher return and if it is too optimistic you will earn a lower return or even suffer a loss of capital. Your return on investment is also affected by changes in market consensus. Consider this example: On the day you invest the market consensus is that the company will consistently grow its profits at a rate of 20% per annum for 10 years, after which profits will be maintained at that level. If the next day the market reduces its growth expectation for the company from 20% to 15% per annum, the share price will drop by almost 35%. So although you have invested in an absolutely fabulous company that continues to perform, because the market consensus changed you are facing a 35% capital loss.

In conclusion: The expected return one could reasonably expect from an investment in blue-chip shares is well below the level needed to adequately compensate one for the risk of suffering a large loss of capital.